The role of #gasstorage is expected to be even more pronounced due to the higher penetration of intermittent energy sources & more electrification into our #energy system. With this study, we wanted to look into more details and raise awareness "
Dr Axel Wietfeld, #GSE President

"The #data we collect & make available for further analyses is the latest & most accurate from the industry. We will continue to deliver the right & most #reliable figures in support for the best decisions.”
Francisco de la Flor, #GIE System Operations & Development Area Sponsor

📣Our new #study is out!
Dive into the vision paper & map to learn more about underground #gasstorage's value to the European #hydrogen system.
Discover their key role in establishing an integrated #energy system & #H2 economy by 2050 here:
➡ https://bit.ly/3zq5p9w

The Citizens Energy Congress virtual will open on Tuesday 15th June to welcome thousands of energy transition virtual attendees, from industry, government and civil society, to debate the difficult questions at the heart of the energy transition.

"Let's look at #LNGterminals and low-carbon & #renewable fuels: they have a major role to play in decarbonising #transport! The good thing ➡️the infrastructure we use today for #LNG can be easily used tomorrow for #bioLNG & #syntheticLNG." @AbelDavEnriquez, @enagas

GIE President
Chairman of GIE Board and GIE General Assembly

Torben Brabo is CEO of the Gas TSO in Energinet, the Danish national transmission system operator for electricity and gas – which is an independent public enterprise owned by the Danish state under the Ministry of Climate, Utilities and Energy. He has 25 years of experience in the energy and gas sector in Denmark and abroad. Prior to joining Energinet, he took part in European power and gas projects as part of the liberalisation of the Danish gas market in 2002-2004. As the current CEO in Energinet Gas TSO, Torben Brabo is highly involved in European renewable and low-carbon gas projects.
Besides of being GIE’s President, he is engaged in ENTSOG (European Network of gas TSOs) and the European gas capacity trading platform PRISMA, and promoting ERGAR. Moreover, he participates in several decarbonisation projects, such as the Green Gas Initiative and Gas for Climate. He has held a position as chairman of the board of the Danish-Swedish gas exchange ‘Gaspoint Nordic’. 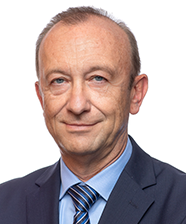 Graduate of the Vienna University of Economics and Business