Heating technologies are ready for or can be easily replaced with #hydrogen in buildings and will provide a stable demand. 🏡

Gaseous solutions can put us on the pathway towards climate-neutral residential heating by 2050. 🇪🇺

📣2021 was a #RecordBreaking year for #biomethane production.

This #renewable fuel is part of #EUGreenDeal's allies:
✅available today
✅can be used in the existing #gasinfrastructure
✅boosting the whole economy's #decarbonisation

Get your free Map ➡️https://bit.ly/3qLtpSa

Find out about more benefits here 💡

📣Why gas-based generation needs to be in the #EUTaxonomy

📣#GIEAnnualConference is BACK!
Grab your chance to reconnect face-to-face with experts from the #EU institutions, #energy industry, academics, media, investors... And many more.

Energy Transition in the European Union

Gas Infrastructure Europe (GIE) with more than 70 members being gas infrastructure owners met in Warsaw in September 2019 to discuss strategies and ongoing actions undertaken in different EU regions to implement EU climate objectives for decarbonisation. Considerations were taken from both Western and Eastern European perspectives and from both companies with advanced renewable strategies and ongoing development and companies at beginning of decarbonisation.

This paper provides an outline of the discussion at the meeting. 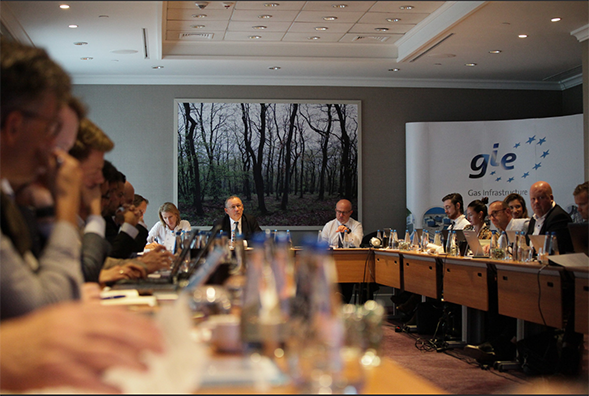 The UN Paris Agreement sets out a global action plan to avoid dangerous changes in the climate by limiting global warming to below 2°C and pursuing efforts to limit it further to 1.5°C. The European Union’s (EU) contribution towards meeting these goals by 2050 is currently under discussion. The focus of the debate is on the EU’s level of ambition in terms of emission reduction targets across different EU member states and the different pathways to achieve such targets.

Achieving a carbon-neutral economy by 2050 requires considerable efforts and needs the full commitment and involvement of all member states and stakeholders in the EU. As there are clear differences in the current energy mix in the member states, GIE members believe that it is crucial that such a decarbonisation transition takes into account regional differences within the EU, the potential and ambition of each individual member state to reach the targets in a cost-effective way and the flexibility to apply different pathways towards the ambitious 2050 target. At the same time, it is important to consider that the EU’s energy policy has 3 main pillars: sustainability, security and competitiveness. In order to realise the target of sustainability, it is of high importance that the two other pillars (security of supply and competitive pricing) should not be jeopardised. Furthermore, GIE believes that it is imperative that cost-effective ways to significantly reduce emissions are included in the short to mid-terms, in parallel to the development of innovative, low-cost and low-carbon solutions.

In the short term, GIE believes there is still untapped potential to achieve fast and significant emission reductions with the switch from carbon-intensive fuel, such as coal, lignite and heavy fuel oil, towards low emission natural gas. This is a “no-regrets” option; natural gas can quickly substitute coal, lignite and oil in the power generation, heating and industrial sectors. Moreover, the gas infrastructure will help accommodate the increasing uptake of renewable energy sources, inter alia via sector coupling, and pave the way towards the use of renewable and low-carbon gases in the medium to long terms. Transitioning to natural gas will have a significant, immediate and sustainable effect on the reduction of emissions in the parts of the EU with current high dependency on coal, lignite and oil without a significant increase in costs, thus contributing towards efforts focused on ensuring a just transition and acceptance by end users and civil society.

In the short term, natural gas can also have an immediate and tangible positive effect on health problems faced by EU citizens; air pollution resulting from burning high-emission fuels (including NOx, SOx and particles) constitutes a serious health problem in many communities. A shift from waste burning, coal, lignite and oil to natural gas in the heating and electricity sector, and from diesel and petrol to LNG and CNG in the transport sector, will significantly reduce the level of air pollution in a timely and cost-efficient manner. This could also result in tens of thousands of lives being saved annually.

In the medium term, an increased use of natural gas in the energy mix can provide the flexibility needed to integrate an increasing share of variable renewable energy sources such as wind and solar into the electricity system, whilst guaranteeing secure and resilient access to electricity, storage, heat and mobility for EU consumers. Through power-to-gas and other new technologies, in addition to the optimisation of links between gas and electricity markets, the existing gas infrastructure, with its large flexibility and storage capacities, can support the integration of renewable electricity in Europe and reduce the need for large investments into electricity grids – on both transmission and distribution levels. The ability to store gas and produce electricity from gas in periods of high energy demand can also reduce price volatility and overall end user energy prices, thereby alleviating energy poverty.

The gas sector supports the path towards a decarbonised future through innovation in decarbonisation technologies and will continue to do so. GIE believes that biomethane, hydrogen and synthetic methane as well as carbon capture, storage and utilisation (CCSU) technologies provide a portfolio of solutions which will play a significant role in achieving the 2050 objectives in an efficient way. Besides adapting to existing generation biomethane methods, gas infrastructure operators are already investing in various R&D and pilot projects with the intention of developing further renewable gases, energy conversion and – both on transmission and distribution levels into the grid and storage technologies. In some countries, biomethane is more mature and are in recent years financed by non-gas sector stakelholders – global pension funds. We also see initiatives aimed at achieving certain ecnomies of scale to secure costs reductions.

The long-term importance of the gas infrastructure to achieve a carbon-neutral economy has become even more evident as numerous recent studies have assessed and concluded that the significant cost savings that can be achieved in technology-open scenarios, making full use of the existing, well-developed infrastructure and integrated gas and electricity systems, compared to full-electrification scenarios.

GIE’s understanding is that the gas sector will continue to play a substantial role in reducing emissions and increasing economic development and welfare of EU citizens in the short, medium and long terms. On the way towards reducing emissions we need to remember that GHG emissions include more than carbon release. In the short term, emissions can be reduced in some regions through a transition from coal, lignite and oil to gas with the added benefit of better air quality, whilst other areas can continue to develop biomethane and other countries with more developed renewables kick-start a transition with hydrogen. In the medium term, natural gas and biomethane can facilitate a more efficient use of variable renewable electricity sources (wind, solar), while other renewable gases ramp up in the long term. Natural gas, renewable and decarbonised gases (hydrogen, biomethane and synthetic methane) will be key in the future hybrid energy mix to achieve the 2050 decarbonisation targets in a cost-efficient way.

The transformation of the energy sector requires not only the available infrastructure and proven technologies but also a solid legislative and investment framework. Therefore, the upcoming decarbonisation package should duly consider i) the opportunities offered by the existing gas infrastructure and gas in all its forms – natural gas, decarbonised gases and renewable gases – to contribute to the EU’s climate targets. The decarbonisation package should ii) facilitate a roll out of renewable, low-carbon and decarbonised gas technologies which are already mature, as well as iii) facilitate an integration of the gas sector more closely with the power, transport and heating sectors.